If you’re a fan of The Vampire Diaries, you’re already familiar with the supernatural love triangle that’s formed by one beautiful girl (Elena) and two vampire brothers but the question is who would you pick to take home?

I guess it will come to you as no shock that I would pick Damon. The character of Damon is what attracted me to the series. Damon has so many layers to him – funny/sarcastic, nonchalant, vindictive, compassionate and of course sexy, and very, very bad. Don’t get me wrong I love them both Stefan is so overshadowed by Damon. If discussing strictly in terms of character development, I’ve come to notice some reasons for this. The beauty of Stefan’s character isn’t easy to be noticed by all viewers, unlike Damon’s as it is not explicitly expressed in the main story. But rather, much of it has to be seen through flashback scenes and a comprehension of how his past was like. I believe Stefan’s history and past life plays a major part of the person he is in the present day. The appreciation of Stefan’s character could be easily overlooked and overwhelmed by the more exciting and readily unveiled multi-layered personality of Damon.

THE VAMPIRE DIARIES is the story of two vampire brothers obsessed with the same beautiful girl, and battling to control the fate of an entire town. During season one, Stefan (Paul Wesley, “Fallen”) and Damon Salvatore (Ian Somerhalder, “Lost”), returned to their hometown of Mystic Falls, Virginia, for very different reasons – Stefan was determined to get to know Elena Gilbert (Nina Dobrev, the upcoming film, “The Killing Game”), who bears a striking resemblance to Katherine Pierce, the beautiful but ruthless vampire the brothers knew and loved in 1864, while Damon was intent on releasing Katherine from the tomb where he believed she was trapped by a witch’s spell all those years ago.

If you haven’t Watch this I urge you to get caught up fast! The new season premires Thursday 9/9 @ 8/7C. 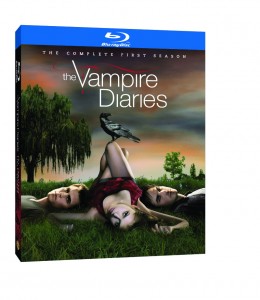 The Vampire Diaries Season 1’s arrival on DVD and Blu-Ray on August 31 so go  pre-order the set today  at .

*I have been hired by Warner Bros. WBWord division to raise awareness for The Vampire Diaries: The Complete First Season – which arrives on Blu-ray/DVD on August 31. Visit to pre-order your set and vote for which vampire brother YOU would like to take home!*