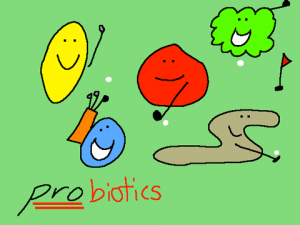 Probiotics are live microorganisms — in most cases, bacteria — similar to the beneficial microorganisms found in the human gut. Sometimes referred to as “good bacteria” or “friendly bacteria,” probiotics are attainable to consumers generally through dietary supplements and foods.

People have an interest in probiotics for health purposes for various reasons. The world has an overabundance of microorganisms, including bacteria, as do people’s bodies – not only in their gut, but also in and on the skin, and other orifices. The good bacteria are essential to the suitable progression of the immune system, protection against disease-causing microorganisms, and to the proper digestion and absorption of food and nutrients.

The balancing act of these bacteria can go awry in two major ways:

1. Taking antibiotics kill unfriendly, as well as friendly bacteria.
2. Unfriendly microorganisms, such as disease-causing bacteria, fungi, yeasts, and parasites can disturb the balance.

Researchers are investigating whether probiotics could be capable of stopping the unfriendly agents in the first place, or at least suppress their advancement and activity in such conditions as:

Side Effects and Risks

While the safety of probiotics has not been thoroughly researched scientifically, there are cases of live microorganisms having extended use as probiotics with no side effects. More research is required, however, particularly for the safety of our elderly people, young children, and people with compromised immune systems.

If side effects do occur, they tend to be of a mild digestive nature, such as gas or bloating, although, some serious effects have been noted in some people. Moreover, while probiotics are prescribed to those who have digestive problems, the following problems can occur:

Severe side effects are very rare, but if they do appear, they usually go away without repercussions. However, there are those who do not tolerate probiotics, so a doctor’s visit would be highly recommended for relevant analysis and examinations to determine whether your digestive organs are too sensitive and possibly at risk.

Although probiotics are usually considered dietary supplements, they are widely available in foods. Some food sources containing probiotics are as follows:

In probiotic supplements and foods, the bacteria may have originally been present or added during preparation.

Some of the probiotic foods date back to ancient times, such as the fermented foods and cultured milk products. A lot of enthusiasm in probiotics has been flourishing in recent years, as evidenced in United States’ spending on probiotic supplements — during 1994 to 2003, sales nearly tripled.