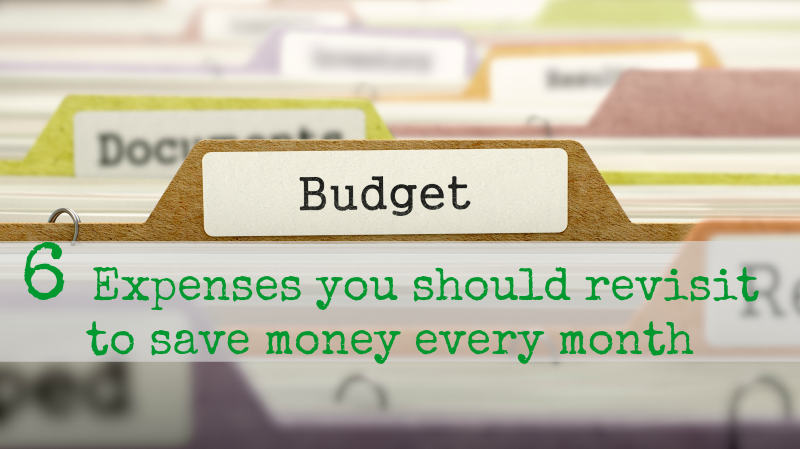 Depending on which study you look at, anywhere between 33-76% of Americans live paycheck to paycheck. People are able to pay their bills, but they’re still in a bad spot because there’s nothing left over for savings. If there’s an emergency or unexpected expense, people often rely on credit cards, which only adds to the expense column.

Organizing your finances is an ongoing job, but it’s one of those domestic chores that really pays off. By tracking your budget at least once a month you’ll know where your money is going and where there are opportunities to save. Start by revisiting the six expenses below to see if you can get a better deal than what you’re currently paying.

Almost every state requires that drivers have a minimum amount of auto insurance coverage. It’s one of those expenses you just can’t work around. But you can save money by regularly comparing offers and taking advantage of discounts. Shopping around you’re also more likely to find specialty products like cheap auto insurance SR22, which certain drivers can use to meet driving requirements.

You’ll definitely want to revisit your auto insurance if you’ve cleaned up your driving record. Often rates are heavily influenced by recent accidents, traffic tickets and charges like driving under the influence. If it’s been a few years since the last blemish on your record, it’s worth the time to shop around for a new policy.

Like auto insurance, health insurance is now a requirement. Some of us are fortunate in that we get a portion or all of our health insurance covered through an employer. Even if this is the case, you’ll have to select your plan, and the monthly premium is one of the top concerns for most people.

It’s tempting to just stick with what you have when the annual open enrollment period rolls around, but that could end up being an expensive choice. It’s not uncommon for providers to bump up the cost of a plan from one year to the next. The extent of the coverage, maximum out of pocket amount and deductible could also change.

Even if you aren’t trying to reduce your expenses, keeping home and renters insurance up-to-date is extremely important. Both types of insurance can cover the cost of the items in your home if they’re damaged during a natural disaster or stolen. If you buy high priced items but don’t update your insurance there’s no guarantee those items will be covered.

When your living arrangements change or you need to update the coverage this is the perfect time to compare your current policy to other offers. You may also get a better deal by using the same insurer for both your home and auto insurance.

Interest rates on loans are never a constant. They fluctuate because they are based on changing economic factors including Fed fund rates and the general health of the economy. The situation allows for a special financial tool called refinancing.

Anyone who got a loan before the recession or didn’t get the best rate because of a past credit score that’s since been improved stands to benefit by refinancing. There will be some upfront fees that have to be paid, but lowering the interest rate could save much more money over the life of the loan.

Do you live in a deregulated area? If so, you have the ability to choose a utility provider. All providers offer their own rates, which varies depending on the current price of gas and electricity production. Paying just one cent less per kilowatt-hour could help you save hundreds of dollars over time.

Since the rates for gas and electricity change all the time, it’s something you’ll need to keep track of if you want to get the best price possible. Typically, you’ll sign a contract for a specified period. Once the contract is up you can shop around and switch providers. Because you’ll be locked in for a certain amount of time finding a better rate can have a big effect on your budget.

If you’re like me you held on to an old cell phone plan for way too long. I had a grandfathered unlimited data contract that was over $100 even though I basically never used more than 5GB in a month. The thought of having the coveted limitless data clouded my financial judgment.

There are plenty of providers offering a variety of plans and special deals for new customers. Analyze your cell phone use over the last six months to determine the minimum amount of minutes, texts and data that a plan needs to have so you don’t get hit with overage fees. Next, find the plans that cover your needs and compare both the reliability of the service and the cost to find the best option.