While the words “prom night” brings on gushing and giggles from many teens, for most parents, the thought of their teen heading off to prom can prompt concerns about their child’s safety and behavior, as well as worries about finances and what to do if their teenage doesn’t have the perfect night they have envisaged.

Proms are one of the key rites of passage for kids though, and can be an exciting thing for parents to get involved in, in a constructive way. Read on for some practical tips you can follow to help prepare for your child’s upcoming prom night, to ensure that they have an evening that is memorable for all the right reasons. 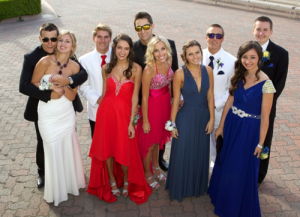 It is always wise for parents to have a discussion with teens about safety before they head off to their prom. Everyone knows that these events can often be hives of underage drinking and drug taking after all, as well as other types of reckless behavior.

It is a good idea, then, to talk with your child about the consequences of doing something illegal, not just within your household, but in the bigger picture. For instance, remind them that being arrested for drunken driving, drug taking, underage drinking, sex in public places, and so on can end up on their record forever, and affect their college acceptance and job opportunity prospects.

In addition, there are the safety concerns for their personal health to worry about, and that of their friends and other students to consider. Drinking too much or taking drugs can result in serious health issues and even death; while many car accidents occur because of drivers being intoxicated, distracted, or falling asleep behind the wheel.

It pays to consider hiring an affordable driver service for the night, such as this specialist NYC prom limo option. You could have other parents or students chip in to pay for the service if a group of friends want to go together, or simply arrange it yourself or encourage your child to save up for the experience. That way, you can have peace of mind knowing that your child won’t be in a dangerous vehicle, and they can have a fun, and safe, way to get to and from the prom.

If your child really does want to drive, or be driven by their date or friend, remind them of the importance of wearing seat belts and not hopping into a car with someone who is intoxicated. Furthermore, make sure you stress to your teen that no matter what time it is, what happens, or where they are, that you can come and pick them up. You might want to give them some cash to have on hand for emergencies too. If you want to put a curfew in place, this is something to discuss before the night.

You also want to remind your child about the importance of not being pressured into sexual activities, and the need for safe sex; and the appropriate use of cellphone cameras and social media posting (with photographic evidence of things they don’t want other people to see potentially being documented online forever). It is also a good idea to have your child promise that they will check in with you during the night to let you know if they go to a different venue (such as an after party at a friend’s house) than expected. 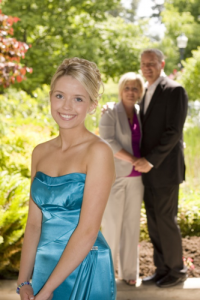 Before the prom, think about finding out about the various rules of conduct at your child’s school, or at another educational institution if they have been invited by a partner that attends elsewhere. It pays to speak to teachers, a guidance counselor, and/or the principal to find out what is acceptable and expected behavior at the prom.

Once you are clear on these rules and regulations, make sure you convey them to your teen, so that they won’t accidentally flaunt them, or knowingly flout the rules but think there is no consequence of doing so. After all, the last thing you want to happen after prom is that your child is suspended or expelled for silly or dangerous behavior.

You might also like to have contact details on hand for chaperones at the school where the prom is taking place, and give out your contacts so that if anything happens to your teen you can be called straight away.

If you know that your child will be attending an after party at a student’s house or other venue, make sure you also have contact details for people there, and have the address details written down. It is also wise to take the name, cell number, and driver’s license number of your child’s date.