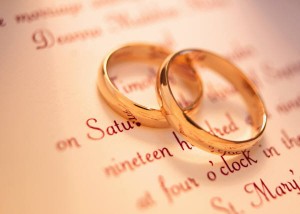 Just last week I was reading an article about the growing popularity of people that have, after years of being married, then deciding to renew their vows with a ceremony. This comes at a precarious time when the divorce rate has reached an all-time high. According to divorcerate.org, in 2011 the rate stands at around 40 percent for first time marriages and 60 percent for those that have been married already. This figure has only seen in increase with time and, as a wife and mother, I was interested in the idea of renewing wedding vows. It seems that in the attempt to renew commitment for each other, many couples have decided to go for an alternative route rather than the traditional ceremony.

Now, these ceremonies aren’t a new idea but they’re being used on a broader scale now, it would seem. This likely due to average people just wanting to do something a little different and shake up the monotony that can sometimes take hold in a marriage. It’s a rededication to each other and their shared life together. It’s a way for people to show their love and how much they appreciate the time they’ve spent together. It’s also about wanting to do something different. A lot of people don’t want to do the same thing they did before so I did a little research and found some interesting jewelry ideas for people wanting a non-traditional option for their rededication ceremony.

In my search, I stumbled across this web site called, Off Beat Bride. I loved it. It didn’t just have alterative jewelry options but all of these original ceremony ideas that you can include in your event plans. One of the tag lines was, “Non-Sucky Wedding Rings.” I had to laugh at how unique the approach was. You could choose from rubies and sapphires and many other options. It’s really a great web site if you just want some ideas that will offer some affordable and strange ideas that may be quirky but could also be right up your alley.

In the last decade or so, the horrors of the blood diamond industry have made its way into the public consciousness. The demand for these precious stones has fueled an industry that has brought about untold atrocities that has afflicted the African continent for years. This has prompted many couples to go an alternative route. Some have even started to buy  black diamond engagement rings as an alternative to the traditional diamond. It seems that the diamond industry is getting better at policing this issue since it’s gotten so much attention but it’s still really difficult to track every single diamond in the world. Conflict free diamonds are also available but they come at a heftier price but you have to ask yourself what your peace of mind is worth.

Some of these options range in affordability but much of it has little to do with the cost and more of a symbolic gesture towards each other. If this sounds like an interesting option for you then I’d recommend looking around for some additional ideas. Coming up with just he right plan can be tough and especially so if you want to stand out on your second go-around. Some of these web sites and options will give you just that but everyone has different tastes. You may want to go a traditional route and have the wedding you never had the chance to have in the first place. Whatever your situation, make your decision together to make for a very special event.